CSB has won the silver medal at the International Foodtec Award

CSB Automation has won the Silver International FoodTec Award for its innovative logistics solution at Dutch meat processor ProMessa. The successful automation of intralogistics and supply chain has brought about substantial improvements in freshness, efficiency, and productivity. The prize is considered as the leading award for the international food technology.

With this award, the panel of international experts especially commended the solution for its innovative approach, which was developed jointly by CSB-System SE and CSB-Automation SE: The software controls and monitors the entire intralogistics process, which comprises three automatic crate warehouses for empties, large and small quantities, four integrated price labeling and picking sorter lines, an automatic dispatch warehouse and, conveyor technology. Among others, area gantry robots are used - a technology which, to date, has been rarely used in the food industry. Overall, the software ensures a more efficient use of the storage and conveyor technologies.

Specifically, the logistical processes at ProMessa’s facility in Deventer are as follows: Coming from production, the products are packed into internal containers with a unique identification, and distributed fully automatically to the two warehouses. Small-quantity items are moved to a single storage position inventory, while fast-movers are forwarded to an innovative portal gantry robot warehouse. From these storage facilities, which serve as a buffer before labeling and picking, the containers are moved to the four weigh labeling lines with connected goods-to-person picking sorters. Customer-specific labeling and picking are completed in a single step. The IT system simplifies the processing of the orders, as for every batch a so-called “case calculation” is performed prior to picking. Every customer order is distributed to pre-calculated mixed containers in line with the customer requirements. In the next step, the order management system ensures the optimal distribution of the required quantities to the four weigh labeling and sorter lines. As a result, all systems can process the largest possible quantity per item. The connected dispatch warehouse, which is a large-area gantry robot warehouse, collects the shipping containers in customer-specific stacks. All of these steps are performed along optimized routes, decoupled from all upstream processes, throughout the day.

In keeping with the Smart Factory principles, the IT system links the entire process chain into a powerful comprehensive solution: from procurement to production, interim storage, picking and dispatch. “The software plays the role of the central nervous system. This project has clearly demonstrated that the

pursuit of a high degree of automation can be achieved with digital business processes.” According to Max Studer, Managing Director of CSB-Automation SE, ProMessa today can handle a batch size of 1 at minimal logistics costs. CSB-Automation SE, winner of the award, was the one responsible for the project within the CSB Group.

The output has doubled from 50,000 packages to more than 100,000 packages per day, while the number of staff remained unchanged. Further economic benefits were generated in the area of inventory management. The new intralogistics system now enables ProMessa to respond much faster to reorders, without having to build up large stocks. This has a positive effect on the capital employed and increases the cash flow. “In the past, we had to have a much higher ratio of buffer goods that we had to have on stock. Thanks to the speed of our logistical system, we now buffer only prepacked non-labeled goods for one day,” explains Harold Rouweler, Managing Director of ProMessa. In this way, daily deliveries to customers are feasible even with extremely short order lead times. The current delivery performance is over 99 percent. “We are very glad that our solutions have enabled our long-standing customer to achieve such a boost in productivity. This shows that automation and information technology are the key factors in the food industry. And when all components work together perfectly, we get even closer to the Smart Factory,” says Dr. Peter Schimitzek, CEO of CSB-System SE.

The International FoodTec Award is the third award within two years for the CSB Group. In October 2016, the CSB was awarded Best ERP System of the Year in the food category, and in May 2016, the company won the Fleischerei Technik Award for its CSB-Vision image processing solution.

Since 1994, Deutsche Landwirtschafts-Gesellschaft (German Agricultural Society) and its partners have awarded the International FoodTec Award for groundbreaking developments in the field of food technology for their innovation, sustainability and efficiency. A panel with international experts from the fields of research and education, as well as representatives from the food sector select the most advanced concepts. Every three years, the prestigious technology prize is awarded by DLG, in a cooperation with trade and media partners, in the form of gold and silver medals at Anuga FoodTec in Cologne. The gold medal is awarded to products with a new concept and with substantial changes in their functionality, which enables the use of a new procedure or which have considerably improved established procedures. Silver medals are awarded to products that have been further developed in order to achieve significant improvements in their functionality or procedure.

CSB Automation has won the Silver International FoodTec Award for its innovative logistics solution at Dutch meat processor ProMessa. The successful automation of intralogistics and supply chain has brought about substantial improvements in freshness, efficiency, and productivity. The prize is considered as the leading award for the international food technology.

Sign up for the CSB Knowledge Hub and get direct access to a lot of valuable information for your business.

You do not have access to the CSB Knowledge Hub yet? Register now 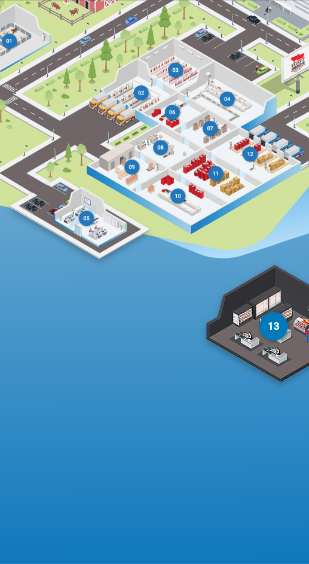 Best-practice processes in the meat industry